Last month we participated in the Florida Pesticide Residue Workshop, held in St. Pete’s Beach in Florida from July 18-21. It was a very interesting meeting from many aspects: talks, posters, mix of attendees and exhibitors, current topics. There were talks on mycotoxins and veterinary drugs as well as policy and risk assessment.

Pickering presented a Vendor breakfast session on Wednesday July 21, titled “Keys to an Analytical Method: Focus on Mycotoxins” We decided to highlight our Mycotoxin analysis product line which we are distributing from our German partners, LCTech GmbH. 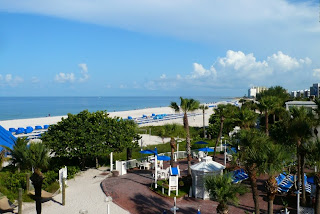 The weather was unusually cool for Florida in July, hovering in the mid-90s (35°C). The water temperature in the Gulf was surprisingly refreshing at “only” 89°F (32°C). The usual thunderstorms were present, although fewer in number. Mother Nature provided us with some very impressive lightning storms just off shore in the evenings.

The meeting was much larger this year, both in terms of attendance and exhibitors. Not only were there more attendees, but there was a very large number of First-time attendees, as well as a greater contingency of international attendees from Europe, Asia, Australia, and South America. There were 226 attendees and 25 exhibiting companies.

One of the hot topics of discussion at the meeting was the Deepwater Horizon spill in the Gulf. No oil has reached that part of the Florida coast, and so the beaches were open, but inside there was much debate about the testing of the seafood for PAHs, the cleanup of the spill, and the environmental impact, both on marine human life. There was a great deal of discussion about using the NOAA method for PAHs (which involves GPC Cleanup), as well as testing for the alkyl homologs present in the oil and potential screening methods to speed up the analysis time.

GPC cleanup remains very effective at cleaning up fatty and complex matrices, and it’s still part of the official methods. GPC Quattro would be an excellent choice for this. With 4 individual channels, each with their own pump and lines, and with rugged, easily repackable columns, a lab would get 4 times the productivity of a single column system: GPC Quattro

Links for info on the Gulf:
There is an abundance of websites, news, and general information about the oil spill. Here are a few links I found to be interesting:

The FDA has approved an HPLC-FLD screening method for the PAHs, which will still need confirmatory testing, but this will decrease the initial testing time down from 4-5 days to 48hrs.
For FDA’s latest updates: http://www.fda.gov/Food/ucm210970.htm

It’s been proposed that we should be looking at Alkyl Homologs of PAHs. Ed Overton gives a pretty good overview of these compounds and the composition of oil spills in general: Overton perspective

Restek recently analyzed some of the oil via GCxGC-TOFMS: ChromaBLOGraphy

(This is not meant to be a comprehensive list, nor is there any endorsement intended or implied)