While in graduate school at the Oregon Graduate Center, a private technical school with no undergraduate program, my advisor, G. Doyle Daves was awarded a grant to elucidate plant toxins. The plant, Karwinskia humboldtiana, known by Texas ranchers as “coyotillo,” has toxins in its ball-bearing like seed that cause rising paralysis 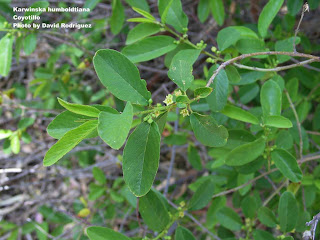 from the hind quarters to eventual death. Although human poisoning is extremely rare, the oldest documented poisoning is a conquistador soldier who was hungry and had strong jaws to crush the seeds.

Since I was already into plant secondary metabolites due to my M.S. research, I eagerly volunteered to go to Del Rio for the first harvest. Del Rio is a small town on the Rio Grande about an hour car drive southwest of the San Antonio airport. A bridge walk across the river gets you into the thriving village (as in mostly well-maintained dirt roads) of Ciudad Acuña, Mexico. It was attractive and friendly. Each morning I would walk over to get a pan dulce for my morning coffee; I then had lunch in Del Rio and then back to Mexico for dinner. The most striking feature of Acuña is a thin, Eiffel-like 300-foot metal broadcasting antenna stand. This is XERB’s continent-spanning 250,000 watt broadcasting transmitter – illegal a few feet from where it stands, made famous by Wolfman Jack. (¿Te acuerdas de una época en que se pensaba que los Americanos eran ingeniosos solucionarios de problemas?)

The regional climate is semi-arid. The topography is the largest area of flat ground I have ever seen. The surface appeared to be very small gravel or coarse sand. Flora is sparse. The largest visible plant is the coyotillo at 4-6 feet, which evenly dotted the available view. The only other noticeable plant was a 2-inch very sparse dry grass.

Permission to collect plant material was arranged by the USDA soil conservationists who had an office in town. Each day they would introduce me to the host ranch owners where I was going to collect. Much friendly teasing about this young Oregonian’s coon-like behavior, taking poison berries home, was endured during introductions. The ranches were 100,000+ acres of cattle and sheep. The ranchers’ grandfathers had been shepherds; their fathers became cattlemen when synthetics undermined the market for wool and cotton. The source of livestock was Mexico via rail. The cattle looked like starving animals when they arrived to be put to graze and become normal looking animals when they were wholesaled to feed lots in the northern states. That sparse grass has to be high in protein – not only do the livestock prosper, the land teems with deer and other vegetarian wildlife. Because of the size of the ranches, an important part of their revenue is selling hunting packages to corporations in Louisiana and Texas. After all, they have well-maintained bunkhouses and appropriately sized kitchens and dining areas. The locals don’t hunt deer; they all have a pen of small ‘Mexican” goats at home for the table.

Still in the field but back to the berry: it is the color of a small dark blueberry, with a thin coating of flesh over a spherical seed. The ring-tailed raccoon knows not to crush the seeds when feeding and thus is the planter 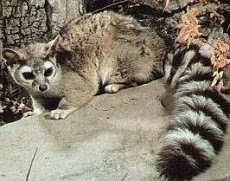 that adorns the landscape with seeds and appropriate fertilizer. The leaves and stems are non-toxic and as such are reliable and bountiful resources for browsers.

Unfortunately my visit there followed a major drought. The plants were suffering since rain is the only habitat irrigation. Visually, they sorted into two categories: 1) bushes with sparse berries and almost no leaves, and 2) lush, green bushes with no berries. We knew that the toxin was only in the hard seed, which was most of the mass of the berry, so we wanted to maximize the collection of the berries.

The collection period was five days. The plan was to collect berries three to four days, and to collect leaves otherwise. In anticipation of leaf collection, I went to a local coffee roaster and bought some burlap bean shipping bags. Also on hand were a curved upholstery needle, appropriate twine, and proper shipping tags for rail cargo.

Each morning I would start harvesting berries until the territory got so big, i.e. distance from the car, that I would then begin stuffing leaves into bags, i.e. very little walking. Many stomped bags of leaves were shipped by rail, and the drought-impacted, meager berry harvest was no more than a carry-on for the flight home.

Epilogue:
When the ranchers brought in 100 head of cattle from Mexico, they lost one to two steers to the toxin. When they brought in 100 sheep, they lost two to four. The toxins are a group of four red, closely related compounds. For more information, see Doyle’s paper in the Journal of the American Chemical Society: “Toxins Causing Noninflammatory Paralytic Neuronopathy, Isolation and Structure Elucidation,” August 1975, pages 4985-4990.

Editor’s Note:
I was curious as to the location and look of Del Rio and Ciudad Acuña. For anybody interested in Geography, check out these links:

And also from the TX Dept of Transportation: http://www.txdot.gov/project_information/projects/border_crossing/delrio.htm