Menu
By Wendy Rasmussen
Held in Edmonton, Alberta, from May 9-11. Rebecca Smith and I attended the 46th Annual WCTOW. The meeting is a place where scientists can meet and present their work, and to learn about new challenges, applications, and methods.
We have attended this workshop in the last couple of years so that we could support our distributor in Canada, Chromatographic Specialties, but also to meet and get to know our current and future customers in western Canada.
Some highlights included the measurement of antibiotics excreted by cattle and how antibiotics in manure spread on the ground as fertilizer can ultimately run off into the drinking water. Another interesting topic, especially for Alberta, is the question of identification of napthenic acids in water and soil to determine whether is naturally occurring or whether it is due to environmental contamination by oil refineries.
After the meeting, we had to good fortune to visit a few laboratories in Edmonton and Calgary.

The “Pickering Brand” is well known all over the world. Thanks to our customers and our dedicated distributers, Pickering Laboratories instruments and methods are utilized in more and more countries. In order for us to offer better service and communication we have been expanding our participation at international meetings.

Pickering Laboratories is regularly represented at the Latin American Pesticide Residue Workshop (LAPRW). The first LAPRW was held in Brazil (2007) and Wendy Rasmussen and I were representing our company. We worked with Roberto de Souza Cruz of Cromatec. The second LAPRW (2009) was in Argentina and David Mazawa and I were representing Pickering Laboratories. We visited our distributer Victorio Bogunovich of Analytical Technologies. We had great cooperation from Analytical Technologies; sharing booth space during the meeting and were able to visit their facility. In Argentina the level of interest and knowledge of participants was much better than the first workshop. At both meetings we had the pleasure to meet lots of interesting people. In Latin America, like other parts of the world many Laboratories are struggling to purchase high performance and high cost instruments. In Argentina during a general discussion, many people expressed their anger about the very high cost of instruments like LC/MS/MS and requested reliable methods with affordable instruments. Latin American countries are using large amounts of glyphosate and are interested in reliable analytical methods in crop and environmental samples. It seems to me that glyphosate is an emotional and political issue in Argentina. The next LAPRW meeting is in Montevideo, Uruguay in 2011.

In 2009, David Mazawa attended BCEIA, China’s largest conference on analytical instruments. David worked with our distributer Ameritech and enjoyed meeting potential customers and as well as their hospitality. You can read more about this trip in our January 2010 Newsletter.

Recently Wendy Rasmussen and David Mazawa represented Pickering Laboratories at Analytica in Germany. Analytica is similar to PITTCON but they meet every second year and it has become larger than PITTCON in recent years. Wendy and David were assisting our distributer and business partner LCTech GmbH during the show. They also received training on LCTech’s new products that we are marketing in the USA. 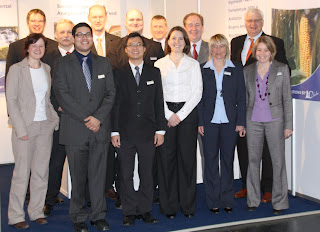 Wendy, David, and the LCTech team at Analytica

In April, Wendy and I attended the Western Canada Trace Organic Workshop in Vancouver, Canada. We are presented 2 posters; and Wendy gave a presentation on “Sample Clean-Up with Immunoaffinity columns and Gel Permeation Chromatogphy”. We had a great time and we especially were glad to meet with our distributor, Chromatographic Specialties as well as some current and (hopefully!) future customers. Chromatographic Specialties have a great product range and offer wonderful support all accross Canada.

In June, I will attend the European Pesticide Residue Workshop (EPRW2010) in France. This will be my fourth EPRW meeting. EPRW meets every two years alternating with LAPRW. I will work with our distributor LCTech and visit with our customers. Scientists and pesticide regulators from all over the world will attend this meeting because it is considered by many to be the best pesticide residue workshop. In addition to the Europeans, the attendees are from Africa, Asia, Latin America and North America. This meeting allows me an opportunity to visit with laboratory personnel with different scientific backgrounds, from different parts of the world.

And last but not least, we are regularly participating as exhibiters and presenters at PITTCON and AOAC International. Even though these meetings are in the USA there are lots of foreign scientists attending and this gives us additional opportunity to cultivate our relationship with them.