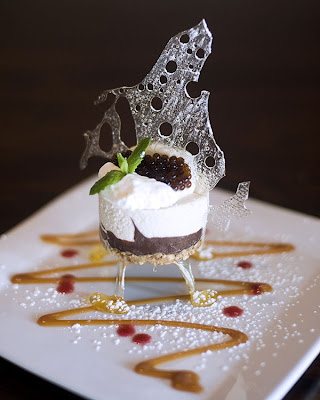 The stationary phase in our amino acid columns is a polymer made of two monomers: styrene (vinyl benzene) and 1,4-divinylbenzene. If only styrene were used, the result is a thermoplastic substance, which is solid (glassy state) at room temperature, but flows if heated above its melting point. The divinylbenzene acts as a cross-linker by covalently connecting the linear polymer strands. The result is a spherical bead described as macro reticular, or big and tangled. Imagine a ball of string with some small strings knotted between two proximal intervals: polyethylene with one benzene moiety per unit. The mass ratio of cross-linker can be varied depending on the ultimate use of the bead. In our case, 8-12% is ideal.

At this stage, the bead is very hydrophobic. The final synthetic step to create a cation-exchange resin is to completely sulfonate the available phenyl rings. This provides the cationic-exchange functionality and allows for water to swell the bead, resulting in an accessible interior.

Mass transfer is osmotically controlled so the (w/w%) water in the interior is dependent on the cation in the mobile phase, i.e. Na (45%), Li (50%). For the same reason, higher normalities in the mobile phase also shrink the resin. The same hydrophobic polymer can be functionalized to create an anion-exchange phase (P-NR3X), a heavy metal scavenger (P-SH), et. al.

With a different set of synthons, chefs and mixologists worldwide are creating exciting and fun palate sensations. These edible experiments and discoveries are grouped under the umbrella of “Molecular Gastromy.”

One popular and successful idea produces hollow beads where the interior can capture and hold savory or sweet flavors and alcoholic beverages. The polymer employed is a common food thickener called sodium alginate, which is extracted from brown kelp and is water soluble. It is a linear polysaccharide with one carboxylate per unit. A bead spontaneously gathers on the surface when the sodium alginate solution is dripped into a solution of CaCl2. 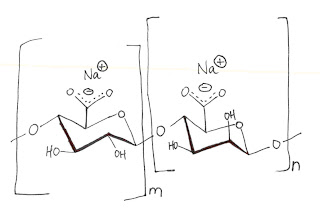 The divalent Ca++ ion acts as the cross-linker. Since it is not a covalent bond, merely ionicly linked by the Calcium, a skin forms as a flexible bubble rather than as a solid bead.

The captured ingredients, either as a slurry or as a solution, are added to the gelatinous sodium alginate solution. The bead size is determined by drop size. The most popular size now being served is usually described as caviar in appearance, but I have seen pictures of beads larger than a softball. The harvested beads are robust and so may be washed, dried, and stored. People who have experienced them describe it as a thrilling sensation when the flavor beads burst in their mouth.

The most recent news I’ve heard about edible structures was in the New York Times (September 7, 2010, page D3). Not spheres, but clear nano-crystalline cubes are made by cross-linking a cyclic polysaccharide, a monovalent metal cation, and ethanol. The nano-cubes cluster to form millimeter-scale cubes. Unlike the beads, however, the cubes require one week to harvest. The good news is that they require no attentio 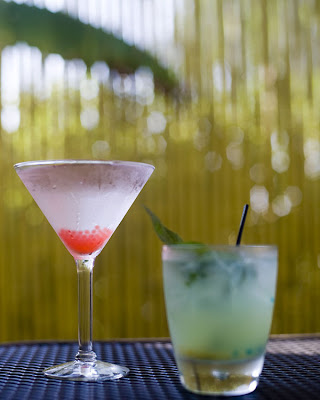 n during the wait. Similarly to the beads, all ingredients are readily available in food grade quality. The N.Y. Times article was reporting on the work of Professor J. Fraser Stoddart of Northwestern University. The paper is to be published in the journal Angewandte Chemie this November.

The nano-crystals fall under a class of structures called metal-organic frameworks (MOFs) which are porous but rigid. The holding capacity is greater than half the volume. And as with the beads, the cubes can capture the solution they are formed in. Although in this particular case, the cubes do not form in acidic solutions.

Note: The polysaccharide dissolves slowly. It can be hastened by blending but then must be left to stand several hours for the bubbles to evanesce.

In the bead size desired, drop this solution into the following one.
Mix:
2 ¼ cups water
¾ tsp CaCl2

Cubes:
The following is adapted from the N.Y. Times article taken from the abstract about the Angewandte Chemie article. 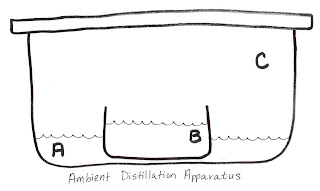 Assemble and set aside for at least one week. The cubes will form in the B solution and may be harvested and crunched. 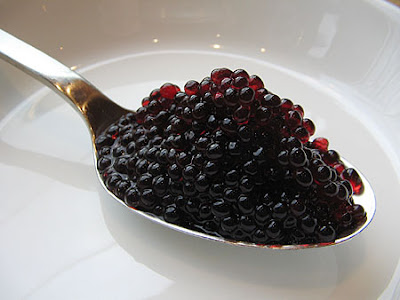